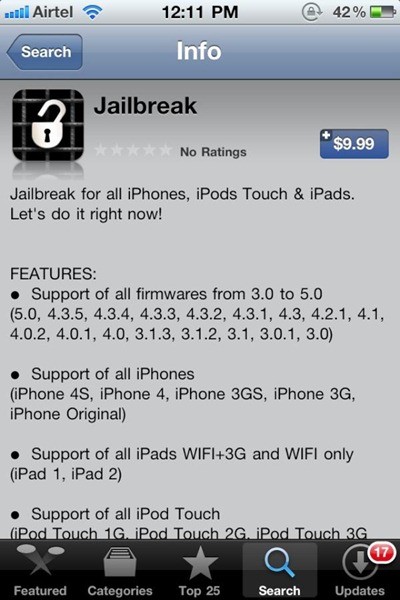 A lot of people around the world have been patiently waiting for an untethered jailbreak for their iDevice to be released. Unfortunately, scammers took this opportunity to make a fake $9.99 application entitled ‘Jailbreak’ and it that says that it will jailbreak you device, as seen in the image above.

After a couple of weeks, Apple has finally pulled the application from the App Store, so people will be unable to get scammed by the app’s false title and description. What I’m wondering is: How did Apple let an app titled “Jailbreak” get accepted into the App Store in the first place?

As pointed out by MuscleNerd, if you visit the App Store link for the fake app, you will get the message that “the item you requested is currently unavailable.” It is very surprising that the app lasted over two weeks in the App Store with such a name and description as it had.

According to AppShopper, the fake jailbreak app was released on October 26th and has been making money ever since.