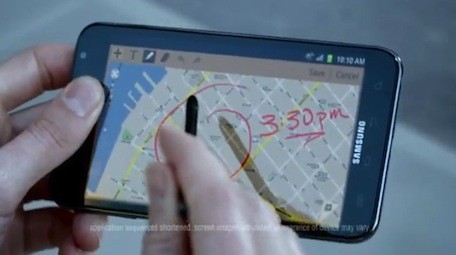 Last night during the Super Bowl, Samsung aired yet another new iPhone bashing commercial. The commercial was to advertise for its new, super-sized Galaxy Note smartphone, which features a huge 5.3-inch display and includes a stylus.

The ad, estimated to cost Samsung a whopping $10.5 million in air time alone, follows the same footsteps as the other ads in the campaign. The ad shows what appears to be Apple customers standing in line waiting for a new device when a happy Galaxy Note user walks up and shows interest in the device, the whole crowd eventually gets a free Galaxy Note and they leave the line at the Apple store.

Yeah, like any of this would happen in real life. Check out the ad below.

Here’s Why iPhone Ads Always Show 9:42 As The Time

US Air Force to Buy 18,000 iPads For Cargo Aircraft